It was a wonderful experience watching the maiden flight of Boeings 787 Dreamliner as it was broadcast live via Boeing’s webcast.

Seeing the vast Everett buildings brought back memories of my visit there in April 2008. Particularly the enormous size of the buildings where the aircraft are constructed. 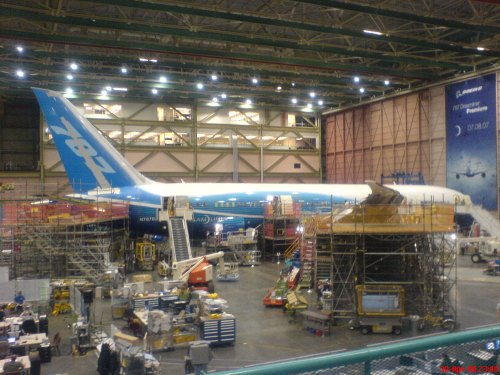 During my time in Seattle I had the opportunity to view the B787 flight simulator, not then in operation, but did give an impressive overview of the flight deck, which I can only described as ‘a visit to the command centre of the USS Enterprise’. Seeing the head-up display (HUD) in a commercial aircraft was a first for me and I was also impressed by the large electronic flight bag (EFB) display.

However now the Dreamliners first flight is over, both Boeing and its Airline customers can focus on the successful operation of the aircraft. Unlike any other aircraft the 787 is unique in its operation. For year’s airlines have operated aircraft safely and securely with tried and tested processes that are applied to new aircraft types as and when they have arrived. Not so for the 787, this aircraft (Also the Airbus A380) is heavily dependant on the digital transfer of information to and from the aircraft.

Ok, you might say ‘what’s the big deal in this day and age, we move data around all the time!!’. Well yes we do but that’s mainly with ground-based nodes on a wide area network. When you have a network of users (350+) on an IT network node that is sometimes disconnected and moves around the world at 35,000 feet you have a different proposition.

For the ground based IT experts this introduces a new set of challenges and for the established aircraft technicians in engineering this introduces challenges of a different kind. Both groups of experts will come from different angles when dealing with connectivity and security, as they will focus on how to secure their independent issues. However they must both look to the horizon to see potential looming regulation that will challenge the most experienced experts to get it right in an operational environment. Getting it wrong may impact the air worthiness of the operation.

Boeings accomplishment of the Dreamliners first flight has to be applauded, I’m sure all those employees seen on the webcast were rightfully proud of their achievements.

This site uses Akismet to reduce spam. Learn how your comment data is processed.